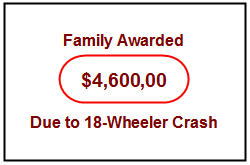 This Thursday found justice when a jury in the 168th District Court of Texas finally reached a verdict on an 18-wheeler crash that occurred on August 2010 in Mitchell County. The semi-rig caught fire killing two men when it smashed into a concrete pillar and embankment on IH 20.

The wife and family of the commercial truck driver filed a lawsuit against XMex Transport, Moore Freight Service, and Trans Front. The aggrieved family was awarded $4.6 million against the three trucking firms. The jury agreed with the lawsuit claim that the driver and his co-driver were forced to continue driving even though physically tired due to an unreasonable work schedule.