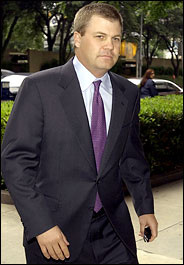 HOUSTON, Feb. 7, 2006 – From fast cars to rugged adventure trips to $6.4 million in bonuses, Enron was a dream maker for Kenneth D. Rice.

While he was still in his 30′s, Mr. Rice, a former Nebraska farm boy and high school jock, pocketed millions of dollars working for the Houston-based energy company. He lived life in the fast lane – literally – racing Ferraris and going on daredevil expeditions to southern Mexico and the Australian Outback with his onetime friend and mentor, Jeffrey K. Skilling, Enron’s former chief executive.

But as early as Wednesday afternoon, a different Ken Rice will take the stand in the criminal trial of Mr. Skilling and Kenneth L. Lay, who was chief executive when Enron collapsed in late 2001. Mr. Rice will testify against Mr. Skilling, who once considered him one of his most loyal supporters in transforming Enron from a staid pipeline company into a cutting-edge trading company with big ambitions. Mr. Skilling helped make Mr. Rice a very wealthy man. His total compensation, including stock sales, in 2000 came to $47.3 million – more than his bosses, Mr. Lay and Mr. Skilling, earned. Mr. Rice spent some of that money on sports cars, motorcycles and a Colorado vacation home.

But these days, Mr. Rice, 47, is a humbled government witness, having pleaded guilty in 2004 to one count of securities fraud for falsely promoting the troubled broadband division that he headed for two years. He faces up to 10 years in prison and is named in at least 32 pending civil lawsuits, with each of them having the potential to bankrupt him.

The government froze his bank accounts holding some $13.7 million; seized his former wife’s platinum, diamond and sapphire jewelry; and put protective orders on his Telluride, Colo., home and a 1995 Ferrari.

Mr. Rice “embodied the traits that cartoonists have seized upon while characterizing Enron executives,” said Christopher Bebel, a former federal prosecutor. “They were driven in professional life by blind ambition and a penchant for an unending wave of personal luxuries.”

In building its case against Mr. Lay and Mr. Skilling, the government has obtained 16 guilty pleas from former Enron managers, including Mr. Rice, and has cast its net to include more than 100 unindicted co-conspirators. But few witnesses in the government’s lineup had the kind of access to Mr. Skilling’s thought processes and moments of unguarded candor as Mr. Rice, outside legal analysts said.

The confrontation between the old friends is expected to offer some of the first riveting moments in the trial, which began last week. Mr. Rice could be critical to proving the government’s case that Mr. Skilling participated in a sophisticated conspiracy to manipulate earnings and defraud Enron, and then lied about it to the investing public while enriching himself through insider stock sales.

Mr. Lay is also charged with conspiracy and fraud, principally for lying to investors about the health of Enron’s businesses in the last few months before Enron imploded in what was the largest bankruptcy at the time.

Prosecutors will use Mr. Rice to try to show that Mr. Skilling “acted as the ringleader” in urging him to lie about the state of Enron’s broadband network to pump up the company’s stock, Mr. Bebel said.

“It will be Rice’s task,” he said, “to establish that Skilling was driving the train on this issue, and it was Skilling who was responsible for the ultraoptimistic projections.”

The broadband allegations are among the most serious facing Mr. Skilling and Mr. Lay. Mr. Skilling made a cameo appearance last year in the courtroom where five executives from Enron’s broadband division were on trial, just days before Mr. Rice was due to testify. The judge in the case ordered Mr. Skilling out. His lawyer, Daniel Petrocelli, later said that Mr. Skilling had a “very deep interest” in the proceedings.

But if Mr. Rice is to be persuasive, he will have to avoid the kind of confusion he displayed in last year’s broadband trial. Testifying on behalf of the government, Mr. Rice incorrectly testified that an unedited video featuring Mr. Skilling had been shown at a January 2000 conference of stock analysts. The trial ended badly for the government last July, with jurors failing to convict any of the five defendants, returning a patchwork of acquittals and deadlocked verdicts.

Mr. Rice could not be reached for comment for this article. Two of his lawyers, William D. Dolan III and Jacks C. Nickens, did not return phone calls seeking comment.

Prosecutors pressured Mr. Rice to plead guilty in part after discovering that he booked profits of $40.3 million from stock transactions in 2000 and 2001. More than $9 million of that came from three trades on July 13, 2001, about a month before Mr. Skilling officially resigned from Enron, according to records from the Securities and Exchange Commission, and around the same time that Mr. Skilling privately told Mr. Lay of his intention to resign, according to earlier testimony by Mark E. Koenig, the former head of investor relations for Enron.

Mr. Rice joined Enron’s predecessor company, InterNorth, in the early 1980′s, and moved to Houston in 1985 when it merged with Houston Natural Gas to form Enron. Mr. Skilling came on board in 1990. Mr. Rice made his name – and won Mr. Skilling’s admiration – by securing a 20-year contract to provide natural gas for a power plant in Oswego, N.Y., run by Sithe, an international operator of utility plants. The deal was later criticized when the cost of natural gas more than doubled years after the contract was signed. But in Enron’s fast-moving culture, closing a deal was everything. And Mr. Rice became one of the best closers around.

The friendship between Mr. Rice and Mr. Skilling grew stronger from a shared fondness for outdoor adventure trips. Mr. Skilling took Mr. Rice and other favorite employees, including Andrew S. Fastow, the chief financial officer, on a motorcycle trip across 1,000 miles of Baja desert in Mexico, and later on a fly-fishing trip to Patagonia.

Mr. Rice also developed a fascination with car racing, competing in a Ferrari Challenge series geared to nonprofessionals who could afford the customized cars. Fast cars became so popular at Enron that at one management retreat in November 2000 outside San Antonio, a race along country roads was offered as an activity, along with golf, tennis and spa treatments, said two former senior managers. Mr. Rice and several other executives brought their own Ferraris and Porsches.

In his carefree Enron days, Mr. Rice increasingly played hooky from the office, choosing instead to spend time at the racetrack driving one of his two Ferraris, or to attend sporting events involving his four children, said two former colleagues.

Mr. Rice no longer races cars competitively. And while friends and neighbors say he is still a frequent visitor to the red brick home in the Bellaire section of Houston where he raised his children, last month he finally ended what one friend said was a tumultuous marriage to his high school sweetheart, Teresa, a pediatrician, according to court records. The marriage had survived Enron’s most celebrated and well-publicized affair between Mr. Rice and Amanda Martin, a former Enron deal maker who was also close to Mr. Skilling.

Mr. Rice spends much of his time these days preparing for trial with prosecutors and reviewing testimony from last year’s broadband trial, friends say. He also volunteers at a Red Cross center in Houston, work he started in earnest after Hurricane Katrina, one friend said.

He finds time to attend many of his children’s soccer and Pee Wee football games. He also has made frequent trips to Nebraska to visit his father, who is suffering from Alzheimer’s disease, the friend said.

Mr. Rice had been considering stepping away from Enron, having made millions of dollars brokering deals that helped build Enron’s nascent wholesale energy business.

But then in 1999 Mr. Skilling persuaded him to take on a new challenge as co-chief executive of the newly acquired Portland General, renamed Enron Broadband Services. After dominating the market for natural gas and electricity trading, Enron tried to do the same with the market for trading Internet bandwidth.

He later told friends he came to regret the decision.