Former Enron CEO Ken Lay and his wife Linda are set for the defense to present their case next week.

By Greg Farrell, USA TODAY
After nine weeks, prosecutors from the Enron Task Force paraded rested their case alleging Ken Lay and Jeff Skilling conspired to hide the true state of the company’s finances from the investing public. Starting Monday in Houston, defense lawyers will present the other side. The heart of their case is expected to come when Skilling and Lay take the stand.Monday, Act 2 begins.

In the first act, which began nine weeks ago, prosecutors from the Enron Task Force paraded more than 20 witnesses before the jury in an effort to prove that Lay and Skilling conspired to hide the true state of the company’s finances from the investing public.

Most of those witnesses alleged that either Skilling or Lay knew Enron was in bad financial shape in the months leading up to its collapse into bankruptcy in December 2001. (Key witnesses: What they’ve testified to)

Legal experts who have followed the trial say the government presented a strong case, and Lay and Skilling now face a difficult, though not insurmountable, challenge in their efforts to win acquittal.

“The defense must do everything possible to dig their clients out of the massive hole the government has dug,” says Christopher Bebel, a Houston attorney who has attended part of the trial. “The odds of a conviction have steadily mounted throughout the course of the trial as prosecutors have piled one brick on top of another while buttressing and corroborating the statements of key witnesses.”

Starting Monday in Houston, defense lawyers will present the other side. The heart of their case, and the highlight of the trial, is expected to come when Skilling and Lay take the stand on their own behalf.

Defense lawyers will call more than a dozen witnesses to testify about the defendants’ character, Enron’s accounting and the turbulent market conditions that hastened the company’s collapse. But it could be the highly anticipated testimony of Lay and Skilling that ultimately determines the outcome of the trial.

Usually, it’s a bold and risky move for defendants to testify in white-collar criminal trials, but in this case, Lay and Skilling have little choice. The government has accused them of heading a conspiracy to prop up Enron’s earnings, a plot that included nearly 100 unindicted co-conspirators.

The defendants would love to call a stream of these alleged co-conspirators to testify that everything they did at Enron was legal and that Lay and Skilling wanted what was best for shareholders, Bebel says. But it won’t happen. Anyone tagged with the “unindicted co-conspirator” label won’t be setting foot in the federal courthouse in Houston unless it’s to invoke their Fifth Amendment right against self-incrimination.

“We have been extremely handicapped because a number of critical witnesses have refused to testify,” says Daniel Petrocelli, Skilling’s lead attorney. But Petrocelli, who seems to have established a rapport with the jury, plans to stick to a theme he has pushed since opening arguments, when he declared “everyone’s entitled to their opinions, but not their own facts.” 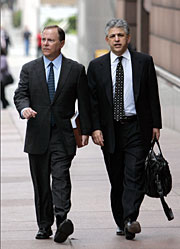 Throughout the trial, when cooperating witnesses testified that they thought Skilling was lying, Petrocelli, who paces in front of the jury box like a panther, has pounced on their statements, demanding how they could possibly know something was a lie without getting inside his client’s head.

His counterpart on Lay’s defense team, Mike Ramsey, has been noticeably less mobile in court, sparking some discussion among spectators as to whether he was feeling healthy. Ramsey addressed that question Tuesday, when he acknowledged that a blockage had been discovered in one of his coronary arteries last week. Doctors cleared the blockage and inserted a stent to keep the artery open.

Now that it’s their turn to put on a show, Petrocelli and Ramsey will pin their hopes for victory on their clients’ ability to perform in front of the jury.

“Lay will have to be a one-man wrecking crew in order to salvage an acquittal, and the same with Skilling,” Bebel says. “The deck is stacked against them, because Lay has to contradict a handful of witnesses, and Skilling has to contradict even more.”

Legal experts who have been following the trial closely credit the government with doing a good job of presenting a complex series of facts to jurors in an easy-to-understand way.

“The government’s case was coherent and made sense and was put in terms that the jury should be able to understand,” says Philip Hilder, a Houston attorney who represents one of the government’s witnesses, internal whistle-blower Sherron Watkins.

It didn’t hurt that the government argued its case before U.S. District Judge Sim Lake, an experienced, no-nonsense jurist who made it clear that he didn’t want to waste the jury’s time. Lake’s insistence on starting on time every day, and his constant reminders to prosecutors and defense lawyers to stay focused have been a boon to the government, at least so far.

“It’s been a very successful Act I,” says John Coffee, an expert in securities law at Columbia University. “This trial is being run by a skilled and experienced judge. Given what can go wrong in a trial, nothing has gone wrong. The trains are running on time. From a prosecution standpoint, you need the trains to run on time. The moment a jury begins to not understand things, they become suspicious and resentful.”

The collapse of Enron – once the nation’s seventh-largest U.S. corporation – wiped out more than $60 billion in market capitalization, cost thousands of Houston residents their jobs and ruined the retirement savings of many others.

In the past four years, federal investigators, plaintiffs’ lawyers, bankruptcy examiners and journalists have been picking over the debris of the company’s collapse, trying to determine the root causes of Enron’s failure and, in the case of the Enron Task Force, to assign criminal blame for the debacle.

In this trial, the task force has avoided pitfalls that can hobble securities fraud cases. The story of Enron’s implosion involves complex accounting maneuvers that the company used to maximize its reported earnings, but prosecutors have steered clear of almost all references to those accounting issues, fearing they might lose the jury.

Instead, they took a simple approach, arguing that Lay and Skilling knew Enron was misrepresenting earnings. Prosecutors brought in eight cooperating witnesses who had pleaded guilty to Enron-related crimes. They and others testified that Lay and Skilling knew Enron was in trouble in 2001, even as the CEOs touted it as a model of robust health to investors and analysts. The government’s case broke down into several easy-to-follow allegations:

– Skilling lied about Enron Broadband Services’ earnings. According to prosecutors, Skilling told Wall Street analysts that broadband was hitting its earnings targets. Enron’s stock surged on announcements about broadband’s success, with analysts believing that the division would revolutionize the marketplace for fiber-optic communications just as Enron had revolutionized the energy market a decade earlier.

Government witnesses, including the men who ran the division, testified that broadband’s business was moribund. Ken Rice, former head of broadband, testified that the only reason it was able to report revenue for a given quarter was by selling unused fiber to a partnership controlled by former CFO Andrew Fastow.

– Skilling lied about Enron Energy Services’ earnings. Like the broadband division, EES was a relatively new division that was supposed to fuel the company’s growth. But former EES chief David Delainey testified that the unit was bleeding red ink.

To disguise the losses, Delainey testified that Skilling authorized the shift of most EES operations to Enron North America, a profitable division that could absorb the losses without exposing the weakness of the unit.

– Skilling encouraged sleight-of-hand accounting transactions. In what proved to be the most anticipated portion of the government’s case, former CFO Fastow testified that Skilling encouraged him to “juice” the company’s earnings by forming private partnerships that could trade with Enron.

Time and again, Enron relied on last-minute deals with Fastow’s LJM partnerships to hit its quarterly earnings targets. Fastow said he had a verbal guarantee from Skilling that his LJM funds would never lose money, even when LJM overpaid for weak Enron assets.

Lay ignored warnings that Enron’s business was sinking. In August 2001, Skilling resigned as CEO, and Lay, who was chairman, took over the job. Fastow said he warned Lay that Enron would have to write down the company’s international assets by as much as $5 billion. A few months later, he said he warned Lay that Enron was entering a “death spiral.” Nevertheless, Lay continued to talk up Enron’s stock and its growth prospects before employees and analysts.

Paula Rieker, who worked in investor relations at Enron, also testified that Lay continued to tout Enron’s earnings strength to outsiders, even when internal discussions focused on the company’s troubles.

Despite the stream of witnesses pointing the finger at Lay and Skilling, the government’s case isn’t a slam-dunk. “The defense case is difficult, but not impossible,” says Jamie Wareham, global chairman of litigation at Paul Hastings, a law firm. “It’s always been a reasonable doubt case.”

Defense lawyers plan to hammer away at several weak spots when they present their case:

– The government didn’t produce “smoking-gun” documents. Despite an intense four-year investigation, prosecutors never found e-mails or memos from Lay or Skilling indicating they were aware they were deceiving the marketplace.

– Auditors and lawyers signed off on all of Enron’s questionable transactions. Despite Fastow’s testimony about how Enron used his LJM partnerships to “juice” earnings, Skilling’s lawyers say they will show that Arthur Andersen gave its approval to all Enron transactions with Fastow’s funds. Lawyers from Vinson & Elkins also signed off on the deals.

– Enron’s wholesale trading division really was profitable. Prosecutors inundated the jury with testimony about bogus earnings at Enron’s broadband and retail divisions, but there’s no question that Enron’s primary business, the trading of energy contracts, was immensely profitable. Defense lawyers will argue that even if some of Enron’s divisions lagged behind, the company as a whole was still profitable, just as Lay told the public in the fall of 2001.

“They’re going to try to prove that all the transactions were legal,” Wareham says.

But that’s where the defense could get in trouble, says Columbia’s Coffee. It would be almost impossible to convince 12 jurors from the Houston area that criminal behavior at Enron was limited to Fastow’s embezzlement of funds.

“The opening statement took the incredible position that there was no problem at Enron,” he says, “that anything hidden was done by Andy Fastow and he cheated us, we’re the victims. That’s a fatal error, equivalent to denying the Holocaust.”