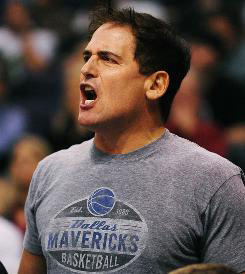 Dallas Mavericks owner Mark Cuban reacts during the second half of a basketball game against the Phoenix Suns in January 2010.

The SEC charged Cuban in November 2008 with using insider information to avoid a $750,000 loss in June 2004. Cuban, the owner of the NBA’s Dallas Mavericks, sold his 6.3% stake in Mamma.com after the search engine’s CEO told him it planned to sell additional stock at terms that were unfavorable to existing shareholders, the SEC says.

A U.S. District Court dismissed the lawsuit in July 2009, supporting Cuban’s assertion that while he may have agreed to keep the information confidential, he said nothing about whether he could trade on the information.

READ THE LAWSUIT: SEC vs. Mark Cuban
The Appeals Court, though, rejected the lower court’s support of Cuban’s assertion, says Gregory Lawrence, attorney at Conti Fenn & Lawrence, when it said in its decision: “Under Cuban’s reading, he was allowed to trade on the information but prohibited from telling others – in effect providing him an exclusive license to trade on the material non-public information.”

The appellate court’s decision also raises issue with Cuban’s initial reaction to the conversation he had with the Mamma.com CEO, when Cuban said, ” ‘Well, now I’m screwed. I can’t sell,’ ” says Christopher Bebel of the Christopher Bebel law firm.

“Cuban’s own language,” Bebel says, “is a crucial piece of evidence that supports the SEC’s theory of the case.” He adds that Cuban’s impromptu comment showed the information was relevant to his opinion of the stock.

Furthermore, the Appeals Court in its decision highlighted a phone call that Cuban made to Merriman Curhan Ford, the investment bank handling the additional issuance of stock. During the eight-minute call, the Merriman representative gave Cuban additional information about the planned offering. The conversation showed Cuban “was on a mission to solidify his determination to sell,” Bebel says.

Separately Tuesday, Cuban’s lawsuit against the SEC to recoup his legal fees was denied pending the outcome of the insider-trading charges against him.

Cuban’s attorneys, Chris Clark and Stephen Best of Dewey & LeBoeuf, said they would have liked the case to have ended, but said the Appeals Court supports their assertion that the SEC must show Cuban had a duty to not trade.

In a statement, SEC spokesman John Nester said, “We are pleased with the court’s decision and look forward to presenting our case.”

The case’s return is a setback for Cuban, Bebel says. Cuban has been a long-standing critic of stock investing, pointing to how investors are shortchanged, writing on his blog, “The stock market is still for suckers.”