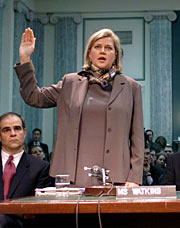 Sherron Watkins wrote a memo warning that Enron could “implode” from accounting misdeeds.

By Greg Farrell, USA TODAY
But when the former Enron vice president takes the stand Wednesday as a prosecution witness in the government’s trial of former Enron CEOs Ken Lay and Jeff Skilling, she’ll no longer be alone.

Instead, the woman who is perceived as the lone truth-teller in a company built on lies will come before jurors as one of many witnesses in the prosecution’s case against Enron’s top management. (Watkins memos: August 2001 memo to Ken Lay | October 2001 memo)

In the summer of 2001, Watkins joined Chief Financial Officer Andrew Fastow’s global finance group. A former accountant at Arthur Andersen, she soon learned the secret to Enron’s success: a bogus accounting gimmick that allowed the company to hide hundreds of millions of dollars in losses from investors.

Scores of executives, lawyers and accountants had approved the company’s financial statements. But Watkins realized immediately that the company couldn’t hedge its losses with partnerships that were capitalized with Enron’s own stock.

After Jeff Skilling resigned abruptly as CEO that August, she wrote her now famous anonymous memo, warning Lay that Enron could “implode in a wave of accounting scandals.” A few days later, she came forward and met with Lay, now chairman and CEO.

Thinking that Lay had been duped by Skilling and others, she urged him to get an outside law firm to review the transactions approved by Enron’s auditors at Andersen and the company’s lawyers at Vinson & Elkins.

When Fastow learned that Watkins had gone behind his back to complain to Lay, he was furious. Watkins eventually told a congressional committee that she feared for her safety.

When Watkins met with Lay again in October, she urged him to fire Andersen and Vinson & Elkins, restate Enron’s earnings, and blame Skilling and Fastow.

Lay didn’t do that, and Enron wound up in Chapter 11 bankruptcy protection. Watkins eventually became one of Time magazine’s persons of the year for 2002, and she co-authored a book about her experience at Enron, Power Failure.

Witness for the prosecution

Watkins is expected to testify about her conversations with Lay. Through the first six weeks of the trial, prosecutors have introduced a parade of cooperating witnesses who have implicated Skilling, but it wasn’t until last week, when Fastow testified that he warned Lay repeatedly of Enron’s financial problems, that the government did any real damage to Lay.

“Sherron Watkins will testify that she told Lay Enron was a house of cards,” says John Coffee, an expert in securities law at Columbia University. “She is going to be a bridge from Fastow, who is not the most reliable or credible witness.”

Defense lawyers are expected to remind jurors that auditors and lawyers approved all of Enron’s accounting transactions. They’re also likely to point out that Watkins sold $48,000 worth of stock after meeting with Lay and advising him of the accounting problems.

On the questionnaire all prospective jurors fill out, at least one of those chosen said she admired Watkins’ bravery in writing to Lay. According to a court transcript, the unidentified juror said she could be open-minded about Watkins’ testimony, but knew how women were sometimes treated at big companies.

“I know how it is with a woman in the corporate world,” she told Judge Sim Lake during jury selection.

Lay’s lawyer is “going to have to be diplomatic,” says Christopher Bebel, a former federal prosecutor. “If someone’s up there, and he’s 280 pounds and he wears a leather jacket that says Hell’s Angels, you can be pretty tough, but if you’ve got Mother Teresa on the stand, you’ve got to be balanced.”