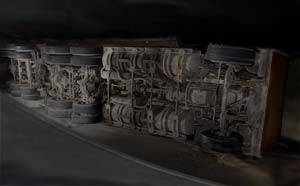 Wednesday morning around 6 AM found northbound IH-35 in Austin more congested than usual as a crash caused an 18-wheeler to overturn.  The co-driver of the commercial truck was trapped inside and had to be free by emergency personnel.

Three people were reported involved in the wreck with no major injuries.  TxDOT indicated that the highway was fully opened to traffic by 1 PM.