WACO, TEXAS (December 16, 2011)–A charter bus, 18-wheeler with trailer, and a passenger car collided Thursday night on Interstate 35 in Waco, Texas. Eight people were taken to a local hospital with various injuries. Waco police Officer Steve Anderson said the wreck happened at about 10:30 p.m. at New Road and southbound Interstate 35. Investigators reported that the truck driver was traveling at an unsafe speed when his rig ran into the rear of a Kia, and then crashed into the bus. Seven bus passengers and the truck driver were taken by ambulance to Hillcrest Baptist Medical Center. Waco Police said the cause of the crash is listed as driver inattention. 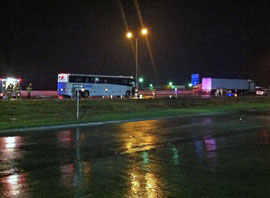